Osp is one of the three best climbing areas in Slovenia! Before we left Hamburg for our trip, Phil bought boulder shoes and we wanted to go boulder outside, so when we read that Osp is a great climbing area we thought we might have some luck.  Sadly, in Osp there are only three small designated bouldering areas (in comparison to three massive climbing areas with a combined 600 routes!).  We found the “A” area and did some climbing and traverses, then had the PB+J lunch we packed for ourselves.  We didn’t stay all that long, however, because the landing was full of spiky plants that made it a bit unpleasant to sit on. 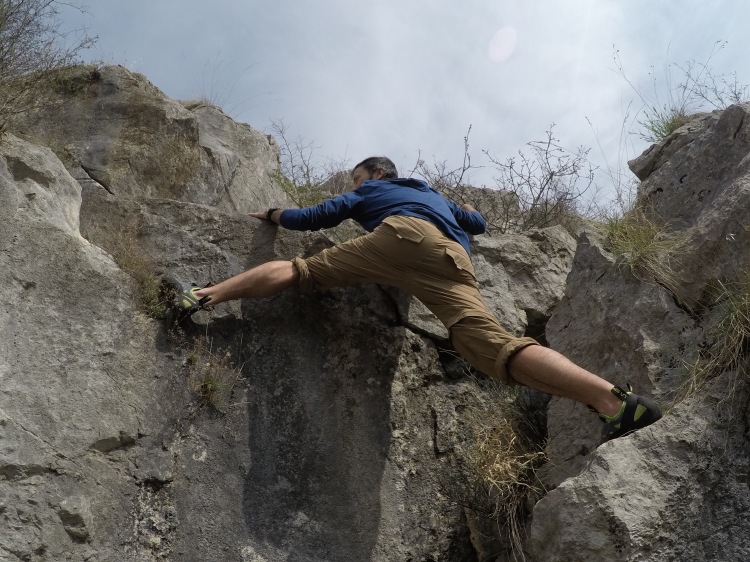 After bouldering for about an hour, we hiked through the mountains along one of the walking routes over to a nearby town (Socerb) about 3km away .  Little did we know, but we actually walked for a short distance out into Italy and back into Slovenia during our little trek. We were also pretty excited to visit the old castle that the town of Socerb was built around.

When we got to Socerb, however, the castle was closed.  It turns out the castle and the restaurant in the town are one and the same, and during the week it’s only for dinner starting at 6pm.  We had to turn right around and head back to our campsite.

On our last day in Osp, we headed out early to try and find the “B” area for bouldering, but we couldn’t find the route down into the gorge.  Since it was still early we headed to Banje, the area directly behind the village and because there weren’t any other climbers there yet, we were able to get in some great traverses.  The ground there slopes up from left to right, so you can actually get a fair bit of climbing and some long interesting traverses without ever getting too far from the ground.

Weirdly around Osp there are a ton of kittens.  We met a few dogs as well, that belonged to the farm, but there were also a lot of very curious cats who took it upon themselves to climb into our laps, try to eat our food and sun themselves on our blankets.  It was a battle to keep them away.  A really cute battle.