Kristin was born in the north of Germany and Phil was born in Long Island, New York. We both grew up on the coast; two shores that are very similar and yet are on two different continents. Torn between both countries we decided to create our life on both continents. 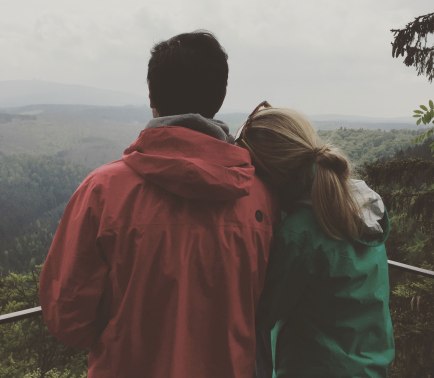 Sounds difficult, but home is where your heart belongs.

Growing up as camper kids and exploring nature with our respective families, we both held onto the dream of traveling. That part got a really raw deal in our daily lives in the last few years so we decided to make a change. That was when we had the idea to give van-life a try.

We’ve spent a lot of time traveling the world extensively in the last decade or so (Australia, Mexico, Europe, United States, and Southeast Asia to name a few), but there is still so much to explore. We’re saving money to realize or dream in 2018. Until we start, we’re still tra
veling and working on our different projects, so we can be on the road soon.

I work for Tui Cruises GmbH, a German cruise line based in Hamburg, as the Head of Family Product Development. With my team, and a lot of passion, I create programs for kids, teens and adults to discover the world while they’re on vacation. I’ve worked for the company for 8 years, from almost the beginning and built the kids, teens & ‘edutainment’ departments from scratch. One of my biggest projects was creating the first ever maritime exhibit on a cruise ship in cooperation with the International Maritime Museum of Hamburg. Prior to my time at Tui Cruises, I worked as an event manager for a political publisher in Berlin

I’m currently doing a certificate program in “Sustainability & Ecology,” and I hope to combine a focus on sustainability with creativity, writing and travel as I collaborate on various projects, and work towards creating my own. I like to share ideas and work with different people to create new things, so don’t hesitate to contact me for projects, events, or crazy out-of-the-box ideas!

I’m a designer and artist for live entertainment, from theatre and dance to music and live events. I studied lighting and scenic design for theatre at the University of Southern California and set out to become a Broadway designer. Along the way I realized that the path I’d chosen wasn’t the right one for me, and I started to explore other avenues, designing sets, lights and projections for a wide range of events and performances.

In 2012, I worked on the world premiere of Rocky Das Musical (that’s when I met Kristin!) and have since that time worked with a large array of well known clients, from Stage Entertainment, Walt Disney Imagineering, Time Warner Cable, Samsung, and bands such as The Album Leaf.

Even though I’ve branched out, I still work in theater, which keeps my storytelling skills sharp. I am first and foremost a storyteller, and I approach every job with that in mind.  Design that puts story first.  www.philkong.com